Home > About > A Potted History of the Gardens

A Potted History of the Gardens

When you are lucky enough to work next to a 13th century castle and among three hundred year old oak trees you come to think that the gardens at Picton Castle have always existed. A lifetime’s work is only the briefest of periods. What you can see today is the result of many centuries of gardening styles, each overlaying the next, where no one style predominates.

The castle was the family home of the Philipps family for four hundred years however there is little documented evidence of the gardens development. A general picture can be obtained from various maps and pictures, accounts and bills and descriptions written by visitors of the past. Other glimpses can be found in the garden itself such as the recipes for complex potting compost mixtures written a hundred years ago on the back of the potting shed door (now our fernery in the walled garden).

An estate map of 1746 reveals deer parks to the north of the castle. The oldest trees in the garden were planted around this time, while closer to the castle were walled enclosures (probably orchards) and formal Baroque shrubberies in an elaborate pattern. We suspect these were made of clipped cherry-laurel. A picture from around this time shows enclosed walled gardens, a large formal pond and what must be topiary. During the later part of the 18th century the landscape style was the fashion of the time, the result being that all the formal gardens were entirely swept away and replaced by rolling lawns and open parkland which at the time were considered to be ‘the finest in Pembrokeshire’.

It was probably in the 1820s that the present walled garden was made. The vast range of glasshouses were originally heated using a central boiler which dissipated its heat through brick flues built into the walls, thus heating the adjoining glasshouses. Around 1860 this was replaced by a more modern hot water system which circulated hot water through four inch cast iron pipes. Around this time many of the older trees in the garden such as the Turkey oaks (Quercus cerris) and silver firs (Abies alba) that line the drive, were planted. These are now majestic trees. Our two redwoods and the massive Rhododendron ‘Purple Splendor’ that sprawls across our lawn also date from the same time.

Garden accounts from the 1880’s include items such as stove for new building, peat and leather boots for pony.  These leather boots were worn by the ponies when pulling lawnmowers and are now quite rare – but we are luck enough to have some on display the the Lumsden Vintage Lawnmower Musem in the Courtyard! Other items in the accounts include a lawn mower, tree labels, peach trees and strawberry plants, apple trees, chrysanthemum cuttings, Hyacinths, Nuts and Pines (pineapples), Prunus plums, flower pots and expenses for the Chrysanthemum Show, Pembroke. From our surviving stack of prize certificates we know that flower shows as far away as Bristol were attended and that potted plants, cut flowers (especially Chrysanthemums), vegetables, grapes and peaches were exhibited on a regular basis. In those days what you grew in your garden commanded you potentially great status. The walled garden would have been a hive of horticultural excellence and during this period at least twenty gardeners were employed. With the start of the First World War the gardeners left and, as with many other grand old gardens, were reclaimed by nature.

This structure of Victorian planting and lawns remains as the basis of the garden today. The last of the greenhouses fell down in the 1950’s but the retaining walls at their base remain, as do the vines that were planted outside and trained through pipes into the greenhouse.

The late Lady Marion Philipps and her husband the late Hon. Hanning Philipps have been largely responsible for redeveloping and planting the gardens that are so colourful today. Lady Marion wrote of the gardens in the following terms: “In 1954 little remained of the grandeur of the past. We set about transforming what remained of the gardens to suit the existing features of woodland and running streams leading through ponds to the tidal waters of the Milford Haven. In order to grow successfully the shrubs, trees and plants which we have collected from many countries all over the world, great attention has been given to shelter”

Conveniently the laurels planted two centuries before had spread prolifically and grow to massive proportions. These were selectively cleared, retaining some for shelter, and a great number of rare, exotic and colourful subjects added that now form the backbone of the garden today. Our current Head Gardener’s predecessor was the late Leo Ekkes who, during his fifty years of service, bred many varieties of Rhododendron which help make the gardens here unique from any other.  Roddy Milne is now our Head Gardener and he has planted, among other things, another eight Redwoods (Sequoiadendron giganteum) and six Chamaecyparis obtusa formosana (from Taiwan) which are both conifers capable of living for over two thousand years. If we are lucky there may be some other visible legacy a couple of centuries from now.

If you were to visit Picton Castle gardens today you would find the walled garden brimming with an eclectic and colourful collection of plants informally arranged in large beds. Look beyond this and you will become aware of the foundation walls of the long vanished glasshouses that ran the length of the south facing wall.

With the repeal of the glass tax in 1845 and the window tax in 1851 ranges of glasshouses became the near essential accessory for wealthy country society. These constructions were aided by technological advances brought about during the industrial revolution enabling more affordable glasshouses of cast iron and wood construction. There was also great interest in growing the exotic plants that were flooding into Great Britain, particularly from collectors in Asia, during this period. There was social status to be gained from their successful cultivation.

The main range of glasshouses within the walled garden at Picton were built around 1860 and heated from a subterranean furnace behind the back wall. Coke was the preferred choice of fuel as it produced less soot and plant harming fumes. The heat from this furnace passed through near horizontal brick flues built into the wall which radiated heat into the glasshouses. The last of these blew down during great storms in the early 1950’s but the flues remain within the walls. One section of this range was the vinery where the vines, which still remain today, were planted outside and trained through a short clay pipe into the glasshouse.

Most likely of slightly later origin (around 1880) were another range of glasshouses behind the walled garden that were heated by a cast iron boiler that circulated hot water through the glasshouses by means of four inch diameter iron pipes. In living memory one of these glasshouses was referred to as the ‘Cucumber House’ and another as the ‘Tomato House’.

Nearby are a series or partially derelict buildings that included the Head Gardeners office and a fruit storage room, above which is a rare surviving example of a grape store. Here bunches of grapes would be picked with a section of stem still attached which would be inserted into a sloping glass bottle containing water. The angled bottles would then be stored on purpose built racks.

Next door would be the gardener’s bothy which provided accommodation for young, single gardeners amongst whose duties would include stoking the furnace and boilers and providing ventilation to the glasshouses during the night. Adjacent to this were the potting sheds which now form Picton’s indoor fernery. Here you will find a door with potting mixtures written on it in pencil dating from the 1890’s. Each type of plant had its own mixture containing; loam, leaf mould, lime rubble, rotten manure and various other ingredients.

Outside you will find the remains of brick built frames that would have had removable glass covers called lights. Some of these may have been ‘hot frames’ which cleverly used the heat given off from rotting manure to provide warmth for the plants within. Pineapples were often grown using this method. To the south of the walled garden against its exterior wall were yet more glasshouses specifically built for growing peaches. These were narrow in width with a steep glass roof and, as with the vines, the plants may have been planted outside and trained on the inside of the structure.

By national standards Picton had a well above average amount of glasshouses. They were used for display, producing luxury fruits and also for cut flowers and plants for the castle and within the large glass roofed, two storey conservatory or wintergarden that was attached to the north side of the castle. The plants displayed here would be brought in at their peak of flowering. Rhododendrons and Camellia were quite often used for this purpose and could be forced into flower for the winter months. This wintergarden however was removed in the 1930’s.

The estate possessed another large (about four acre) walled garden to the south east of the castle that was used for producing fruit and vegetables. The best clue as to exactly what was being grown in all the glasshouses comes from an extensive collection of prize certificates from flower shows that were attended with great regularity for a period between 1880 and 1910 and including Haverfordwest, Pembroke, Neath, Cardiff, Bristol and even as far afield as Crystal Palace in London. More than half these prizes are for Chrysanthemums but others are for; melons, peaches, grapes, exotic ferns, Begonia, Coleus and cut flowers. There is also one or two for what are referred to as ‘stove plants’. A stove house was a glasshouse kept at high temperature for growing tropical plants.

Around 1900 the estate employed 23 gardeners – a great number of whom would have been employed in the intensive cultivation of plants within the glasshouses. The remaining outdoor areas of the walled garden were filled with a series of round beds containing formal bedding plants typical of the Victorian and Edwardian era.

In early 2016, The Picton Castle Trust received initial support from the Heritage Lottery Fund (HLF) for their Walled Garden Project which aims to carry out essential restoration and repairs to this fascinating, rare and historically significant group of buildings within the castle grounds. £645,400 has been earmarked for the project and development funding of £100,000 has also been awarded to help the Picton Castle Trust to progress their plans to apply for the full grant at a later date. Of great importance will be the restoration of the walled garden walls and its wonderful gates, iron railings and gateposts which are topped with codestone pineapples. The project also aims to bring the walled gardens back into sustainable use whilst retaining their character and setting. The outcome will be an accessible and secure part of our heritage which will provide activity, training and education space within the gardens with the addition of new interpretation and display areas and improved volunteer and visitor facilities and will provide enhanced opportunities for volunteer, visitor and educational engagement. In addition it is hoped to create outdoor planted areas exploring the world of plants and their uses to mankind. 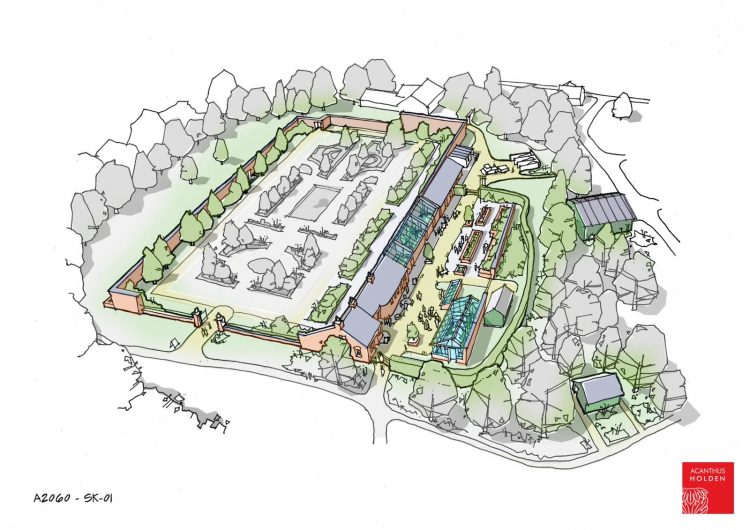 We Now Urgently Need Your Help On This Project!

Take a look at our main Gardens page to see how they look today….

An impressive schedule of events complements our award winning garden for all seasons. See our Events Page for more information