Home > About > The Lumsden Collection of Antique & Vintage Lawnmowers

A world-class treasury of vintage and antique lawnmowers has found a permanent home, here at Picton Castle & Gardens.

Dating from the early part of the 19th Century through to more recent times, the 85 exhibits, many of which are still in full working order, were originally collected and preserved as a tribute to British engineering by Sussex stockbroker David Lumsden.

The collection began over 25 years ago and soon dominated Lumsden family life, as his son Nick recalls: ‘People would ring my father up about abandoned mowers they’d found. Whenever the collection got to a certain size, another shed had to be built – it was a bit like a shanty town!’ Each would be painstakingly restored and preserved for future generations and the ‘Lumsden Collection’ is now considered to be one of the finest in the world. 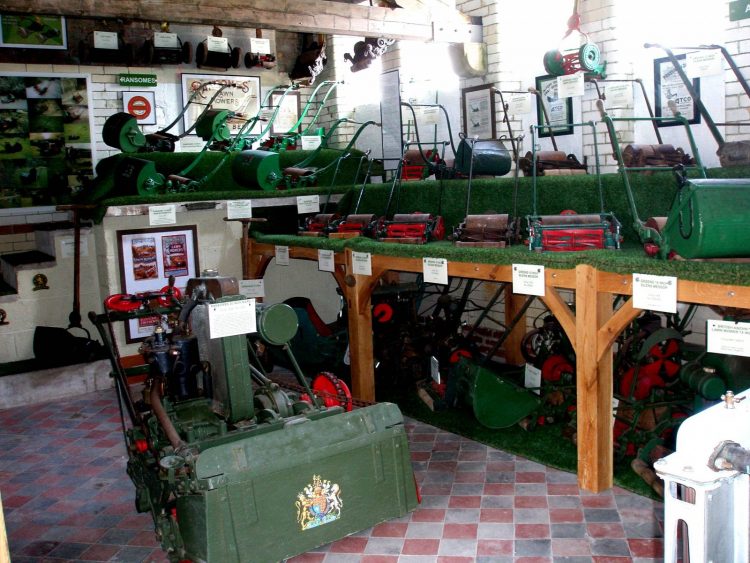 In 2002, Nick Lumsden married into the Philipps family who were the ancestral owners of Picton until the creation of the Picton Castle and Gardens Charitable Trust, and so the genesis of the Lawnmower Museum was born and this fascinating world-class treasury of vintage and antique lawnmowers found a permanent home in Pembrokeshire.

Including models manufactured by long-established names such as Ransomes (now manufacturers of Westwood and Mountfield mowers), Sims, Jefferies, Greens, Atcos, and Shanks, there are also fine examples of larger models designed to be pulled by small ponies or donkeys and still complete with their original livery. The ‘piece de resistance’ of the collection is a mighty 42 inch 1923 Greens with a four cylinder Dorman engine weighing in at approximately two tons! It is the only working model of an early playing fields petrol mower in existence today.

The history of the lawn goes back to 17th century England where close-cropped grass was seen as a status symbol for wealthy landowners who would employ a fleet of servants to scythe their grass. However in 1830 an engineer by the name of Edwin Beard Budding attempted to revolutionise the cutting of guardsmen’s uniforms with an invention based on improving the napping of cloth. His device, the rotary blade, would in fact revolutionise 19th Century gardening and just two years later the first lawnmower was manufactured using Budding’s rotary blade. This marked the beginning of an obsessive relationship between man, machine and our passion for a well-manicured lawn.

This loyal and unassuming piece of machinery has come a long way since 1830 so next time you drag your ‘old faithful’ from the shed – step back for a moment and raise a salute to Edwin Budding whose invention has made your job so much easier and make a date to visit this fascinating tribute to our gardening and sporting history. The Lumsden Collection of Antique and Vintage Lawnmowers can be seen at Picton Castle and Gardens throughout the season.