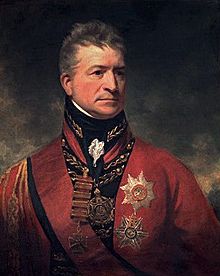 Does your ancestry reveal connections with the name Picton? Or maybe you share the same surname? The extensive use of Y-Chromosome DNA testing alongside thorough documentary research has enabled various Picton families with connections to West Wales to be linked together in a comprehensive pattern for the first time.

Several of these people will be attending a unique presentation about the Life and Times of Sir Thomas Picton at Picton Castle and Gardens on 27 June which forms part of a week-long Picton Reunion (22-29 June) being hosted at Bluestone, Martletwy and is part of a series of events and exhibitions being staged across the country to commemorate the bicentenary of the Battle of Waterloo – the battle that changed Europe. The use of DNA testing in this research and much of the documentation will be discussed more fully in the evenings at Bluestone.

Having won a place from a national competition organised by the Waterloo 200 Committee, 13 year-old Elin Davies of St. Clears will be representing all the local and international Picton families with origins in West Wales at a Memorial Service in St. Paul’s Cathedral on 18 June, the 200th anniversary date of the Battle of Waterloo. She will also be helping to lay the wreath on the memorial there to the General. but after the official remembrance service has finished and the Royal Family has left. A wreath to the Duke of Wellington will be laid on his monument first, followed by one on the memorial of Sir Thomas Picton. Along with her parents, Elin will also be attending the Picton event, as her father Geraint had a female Picton as one of his grandmothers.

Local connections abound, from Thomas Picton’s birthplace in Haverfordwest, to the house he was brought up in at Poyston Hall in the parish of Rudbaxton and his departure for the final showdown at Waterloo from his home at Iscoed, near Ferryside in Carmarthenshire.

In the presentation at Picton Castle & Gardens, all aspects of the life of Sir Thomas Picton will be covered: from his family and friends to those events which helped shape his personal and military character and how he overcame several career set-backs to eventually achieve national renown and to be buried in St. Pauls Cathedral.

If you are interested in the life and times of Sir Thomas Picton (1758 – 1815) and this fascinating period of history, further information and limited tickets for the event on 27 June at Picton Castle and Gardens near Haverfordwest are available from the organiser, Brian Picton Swann on 01276 28598.

Do you know why Wellington’s boots were so unusually short or what the height of the French Emperor was? On a website dedicated to promoting all these events, they are testing the nation’s battle knowledge – check this out and read more.  A link to “The History of Waterloo in 200 Objects” part of the National Army Museum website, which includes the musket ball which killed Sir Thomas Picton at Waterloo also makes good reading.  There are some fascinating objects on this website.

Programme for 27 June at Picton Castle and Gardens

The presentations will take place in the purpose-built lecture theatre close to the Gift Shop & Restaurant and within the central Estate complex. Entrance for cars will be via the road passing through the two lodge houses and reserved parking will be right opposite the front entrance to Picton Castle itself.

A light buffet will be available at lunchtime at around £6.50 per head. There should be sufficient time to stroll around the various walks and gardens within the Castle grounds. On the same day the Castle will also be hosting “Carriages at the Castle”.

10.15 – 11.05  Thomas Picton, his early life until appointment to the Governorship of Trinidad, 1758-1797. The roles of his family, education and military patronage, early successes and frustrations. Examination of new and old source materials (Brian Swann)

1600  Finish and possible tour to the remains of the old Church at Slebech, Slebech House and Gardens for those interested (1 mile away, spectacular views of the upper Cleddau River)

The picture above shows Thomas Picton wearing his Peninsular Gold Cross (made out of real gold), with four bars (various battles, there are also 4 on the cross itself).  The original is now in the State Museum at Patiala in India.  Just where you expect it not to be!!  The reason it is there, is in one of the presentations.

Tickets for this event are limited. For full details contact the organiser, Brian Picton Swann

Click here for a YouTube Video on DNA and Welsh Family History made at a presentation for Who Do You Think You Are at London, Olympia, 2014

Martin R. Connop-Price will joining and accompanying us from mid-morning onwards, travelling across from Ross-on-Wye in Herefordshire [author of Industrial Saundersfoot (1982); Coal, Culm and Cresswell Quay: Some Aspects of the Pembrokeshire Coal Industry in the Eighteenth Century (1994/5); Pembrokeshire: The Forgotten Coalfield (2004)]. His expertise and local knowledge from Martletwy and Landshipping onwards will add significantly to the day’s experience. Lunch at either Landshipping, Lawrenny Quay or Cresswell Quay, depending on time and low water at Cresswell Quay. Martin will stay with us at Bluestone overnight. As so many of us had families connected at one time or another with the coal industry in Pembrokeshire, this is a real bonus.

DNA discussion in the evening. I hope Tom Lloyd and Roger Turvey will join us for this, if so discussion will be extended to include Wales/Ireland links from 1169/70 onwards and the Irish Diaspora Project.

Arrival at Bluestone, Martletwy. Meet and greet. Possible overview of DNA and Pembrokeshire history in evening.

Martin R. Connop-Price will joining and accompanying us from mid-morning onwards, travelling across from Ross-on-Wye in Herefordshire [author of Industrial Saundersfoot (1982); Coal, Culm and Cresswell Quay: Some Aspects of the Pembrokeshire Coal Industry in the Eighteenth Century (1994/5); Pembrokeshire: The Forgotten Coalfield (2004)]. His expertise and local knowledge from Martletwy and Landshipping onwards will add significantly to the day’s experience. Lunch at either Landshipping, Lawrenny Quay or Cresswell Quay, depending on time and low water at Cresswell Quay. Martin will stay with us at Bluestone overnight. As so many of us had families connected at one time or another with the coal industry in Pembrokeshire, this is a real bonus.

DNA discussion in the evening. I hope Tom Lloyd and Roger Turvey will join us for this, if so discussion will be extended to include Wales/Ireland links from 1169/70 onwards and the Irish Diaspora Project.

Long day. Probably 09.00 am start. Llanstephan Castle for views across the Teifi estuary to Iscoed [home of Sir Thomas Picton, 1812-1815], Picton Monument at Carmarthen, St. Clears sites [Chapels and Farms], Llanboidy Church, Cwmfelin Mynach sites, Glandwr Chapel at Llanfyrnach, drive past Prescelli Hills, Penygroes Chapel, Whitechurch Church, possibly Llanfair Nanygwyn, Eglwyswrw and Meline drive pasts. Trewern Arms for lunch (ca 13.15). Meet up with Dr. Reg Davies. Nevern Church, Nevern Castle [important in the history both of the Barony of Cemais, the town of Newport and castles in Wales in general, possible excavations on site (tbc)], Newport town and Castle, Parrog, Gwaun Valley, Fishguard. Dr. Reg Davies will show us around places marked in yellow. The main street in Newport up to the Castle is quite steep.

Suggestions: Pembroke Castle, Cilgerran Castle, St. Dogmaels Abbey, Moylgrove, Cardigan, Mwnt Chapel, Bridell, Trelech a’r Bettws. Coastal Walks. Possibly other sites on request or a walk to the top of the Prescelli Hills to look down on Whitechurch and along to Nevern and Newport.

To some extent this day will be decided on what has happened on the previous days, and people have the flexibility to go off and “do their own thing”.

Final evening get-together. We may go out for a meal at the local vineyard.

Departure from Bluestone by 11.00 am.

All schedules are open to variation because of the weather, but most days are now fixed to some extent, as they involve meeting with other people and their agreements to visit places and help us understand what we are looking at.

Walking shoes will be useful for most days. Wear them, or keep them in the back of your cars.

Martin Connop-Price has advised that for those who may want to accompany him across the Cleddau River at Cresswell Quay at low tide via stepping stones in the river (timing to be confirmed), wellington boots are recommended. I, for one, have never done this.

Llangwm is 5 minutes later than Milford Haven. All times GMT. Low tide is about 6 hr 10 min after high tide. This will enable you to see some of the remains of the once extensive coal and culm shipment facilities at Cresswell Quay. See “Coal, Culm and Cresswell Quay” – available as a PDF document from BPS, and also available from the National Library of Wales website [just google the title words and click on the PDF sign on the page that opens]. The article comes from the 1994/5 Journal of the Pembrokeshire Historical Society.

Also joining us for some of the time will be:

The Families of Picton by Hero von Friesen and Tomas Lloyd, OBE, DL