Home > Blog > The ‘Picton Renoir’ – On View in Picton Castle

The ‘Picton Renoir’ – On View in Picton Castle 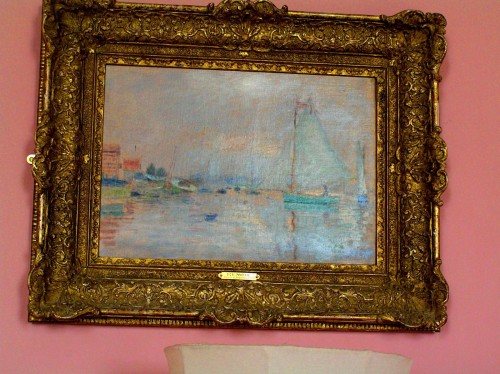 This fascinating painting which has caused so much controversy can be seen by the general public when you take a Castle Tour. Please check Tour Dates and Times Before Your Visit.

The ‘Picton Renoir’ was the subject of a gripping programme in the BBCs series “Fake or Fortune” with Philip Mould & Fiona Bruce.  It originally aired in July 2015 and was repeated in September 2017. The programme received a record 5.9 million viewers and unprecedented social media response.

Nicky Philipps, a portrait artist famed for her pictures of the Royal Family, asked the Fake or Fortune team to investigate a painting which hangs on the walls of Picton Castle, once the Philipps family seat.

The work was bought in the 1930s by Nicky’s great-grandfather, Sir Laurence Philipps, who believed it to be by celebrated impressionist Pierre Auguste Renoir. However the painting has been dogged by doubt for half a century, and two art world authorities refuse to agree on its pedigree.

Nicky’s late Aunt Gwen used to tell a story that the painting came from Claude Monet’s house in Giverny and was a gift to the artist from Renoir at a time when they painted together. But a family anecdote wasn’t enough to convince both of the art world’s toughest judges – so in a tantalising trail of blind alleys and major new discoveries, the Fake or Fortune team set about gaining some hard evidence.

The trail took Philip to Argenteuil, a suburb of Paris which was once an impressionist playground. During the 1870s, Renoir and Monet worked here together, often painting the same views side by side.

Fiona picked up the provenance trail at Monet’s house in Giverny, where she tried to find proof that the painting once hung in his personal art collection and managed to gain access to some closely guarded archives in Paris.

Then Philip took the painting to Berlin for thorough forensic analysis,where cutting-edge technology was used to determine whether the pigments in Nicky’s painting matched those listed by Renoir himself for the period and where several tests using an infra-red camera also revealed a previously hidden stamp which matched the canvas supplier to the period.

A more sinister reveal was that the picture was caught between two warring art world authorities – the Bernheim-Jeune Gallery and the Wildenstein Institute who both believe their word is the last word when it comes to Renoir – but without both seals of approval, the final approval of the Picton Renoir as genuine remains in dispute.

The Bernheim-Jeune Gallery have approved the painting as genuine and have included it in their listings. However despite producing the most incredible evidence including a paper trail which backs up Aunt Gwen’s story, the Wildenstein Institute still refuse to accept the unsigned painting due to insufficient evidence.

This fascinating painting which has caused so much controversy can be seen by the general public when you take a Castle Tour.

Please check Tour Dates and Times Before Your Visit.

What do you think?